Steam systems rely on dozens of moving parts to operate properly. If even one piece of an asset malfunctions, it could spell disaster for a facility.

Here are the top four dangers of steam systems and how to prevent them:

One of the biggest hazards of any steam system is the risk of injury to employees due to slip and fall hazards. On a national scale, slips and falls account for an estimated $70 billion in workers’ compensation and medical bills, according to the Centers For Disease Control and Prevention. This data is supported by research from Martindale-Nolo, which found that the average cost of a workers’ compensation claim for a slip-and-fall accident is between $17,200 and $27,500.

Prevention tips: Preventive maintenance of steam systems is one of the best ways to prevent slips and falls at a facility. When condensate is released into the atmosphere, it can quickly make the floor slick. Using ultrasound technology, inspectors can pinpoint small leaks before they would otherwise be visible to the naked eye. Then, maintenance staff can take action to repair aging assets before they become a problem. Likewise, slip-resistant footwear can protect employees from hard-to-spot hazards in low-light environments. 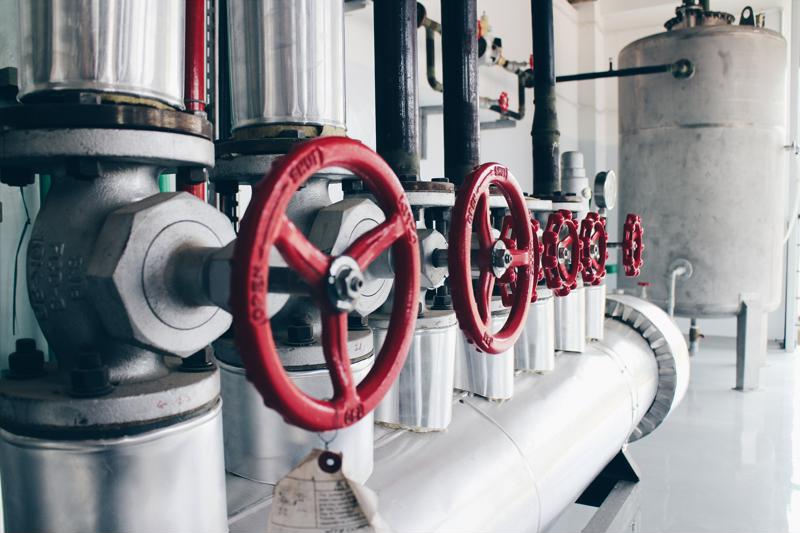 Corroded valves and pipes will decrease the entire system’s efficiency.

In addition to causing slipping hazards, steam leaks can lead to abnormally warm pipes and ambient temperatures, making the facility unsafe for workers. This problem is especially apparent in low-pressure steam systems where feedwater must be heated past the boiling point. Burns caused by steam can severely injure workers and reduce efficiency over the long term.

Prevention tips: Assuring steam traps are functional is one of the top ways to reduce the risk of dangerous leaks. The Ultraprobe® 100 and Ultraprobe® 3000 are great options for assessing steam traps and preventing asset failure. Both products are easy to use and absolutely essential for facilities managers who want to keep workers safe and control resource costs at the same time.

A ruptured steam pipe is a serious problem with the potential to cause bodily harm and serious financial risk. When a steam trap fails in the closed position, it can cause condensate to back up, increasing pressure levels and causing water hammer. Steam traps aren’t the only culprit, either. Poor maintenance of steam systems can also lead to pipe and valve corrosion, two more precursors to pipe rupture.

“Ultrasonic technology spots leaks before they become a problem.”

Prevention tips: Traps and valves should be monitored regularly for signs of anomalies. The Ultraprobe® 2000 can be adapted to test almost any problem in operating equipment, reducing downtime and diagnosing problems before they become safety risks. The Ultraprobe® 9000 does all that and more, allowing technicians to store data directly on the device and download the information via USB for easy reporting.

If a steam system has never been inspected and isn’t subject to a recurring maintenance program, upwards of 50 percent of the system’s steam traps could be failed or blowing live steam. That unused energy can severely cut into a facility’s operating costs. Managers who want to control costs and conserve precious resources need to implement a preventive maintenance system to protect their assets and employees.

Prevention tips: A annual inspection of a steam system can reduce trap and valve failures by half, and more frequent preventive maintenance will increase efficiency accordingly. Ultimately, the size of a facility and its access to resources will determine the optimal maintenance schedule. For optimal efficiency, the Ultraprobe® 15000 features state-of-the-art technology that takes an entire ultrasonic condition monitoring laboratory and puts it all in a single tool.